Does the Victorian Bulldog catch your eye? Of course, the dog’s lovable face and powerful body are some of the traits that endear it to humans.

Whether you have a Victorian or not, it is essential that you know some details about what the breed likes health, food, etc.

If you want to read more about the breed, then you are in luck since there are several topics below that you can read and learn.

What is a Victorian Bulldog? The Victorian Bulldog is a modern breed developed by a Ken Mollet a London-based breed. Ken Mollet has a brilliant idea of reviving the 1800s kind of bulldogs and make a canine that is more healthier as well as taller. Ken Mollet began his breeding programs in the 1980s, and he used statues, written records and old photographs from the 19th to gain insight on breeding the dog. The breeds that Ken Mollet used for breeding are the English Bulldog breeds, Staffordshire Bull Terriers, Bullmastiffs, and Dogue de Bordeaux breeds to develop the Victorian kind.

Today the Victorian canine is now a favorite Bulldog pet that has fewer health problems, more athletic and a lovable personality. The Mollett Victorian Bulldog is from Britain, thus sold among the English, but now it has arrived in the United States and is being sold in that country.

The Appearance of the Victorian Bulldog

Victorian Bulldogs are medium in size, with a thick-boned, muscular body, wide chest and large heads that are proportionate in size. The dog’s head rests on a large muscular neck and has a turned-up short, broad muzzle with a jaw that has a square bite. The eyes are dark and set low as well as forward in the face. The coat sheds a medium amount of hair. The ears of the Victorian Bulldogs are button-shaped or medium to short rose-shaped with no cropping. Lastly, the canine’s tail is either straight, corkscrew, but not carried over its back, or turns down.

This dog breed has a wide range of colors in its coat, and it comes in a variety of combinations. These are the colors you would see in a Victorian

The coat colors complement the canine’s looks, thus making it a lovely sight to see with your eyes. For some people, Victorian Bulldogs look tough, and they may erroneously think that the dogs are aggressive. In truth, however, a Victorian canine has a gentle and friendly personality that is inherited from its modern English Bulldog bloodline. With the right kind of socialization, the Victorian dog gets well along with people, and it loves human attention from you and your family. The breed is good with children and other pets, as well as being a loyal and protective animal. Not only have you had a wonderful pet companion, but also a useful guard dog.

Unlike other typical Bulldog breeds, the Victorian dog is a bit of a laidback pet and has a calmer disposition. Hence the canine needs or does little activity, but they still exercise for staying healthy.

A Victorian Bulldog has little health issues and this due to Ken Mollet’s doings who wanted a Bulldog breed that is much healthier than other Bulldog breeds. As a result of Ken Mollet’s hard work, the Victorian dog has little or no genetic diseases, but your pet will experience problems from time to time. To help you spot the animal’s physical issues early, this list has some examples of those issues:

Other problems involve eye problems or loss of vision (which inevitable due to aging) and the common ones that include the teeth as well the dog’s ears. These common problems can be prevented or mitigated if you are conscientious with your pet’s well-being.

A Victorian Bulldog lifespan is 12 to 14 years which means that you and your family will enjoy its company for a long time. With the proper care and health management, the Victorian can go beyond its lifespan limit. 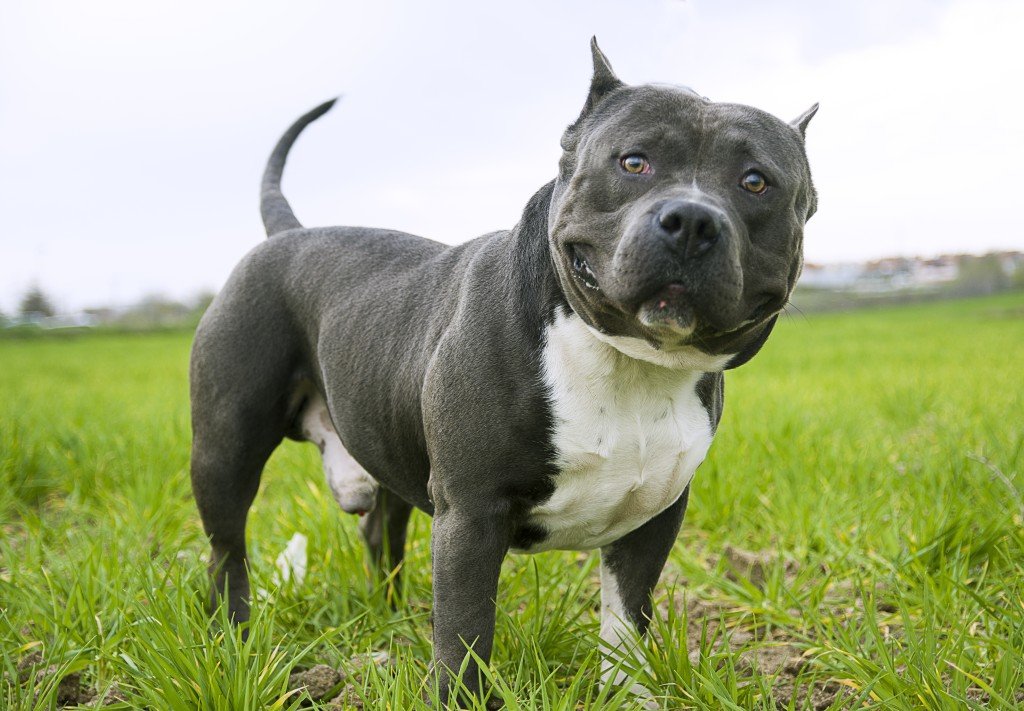 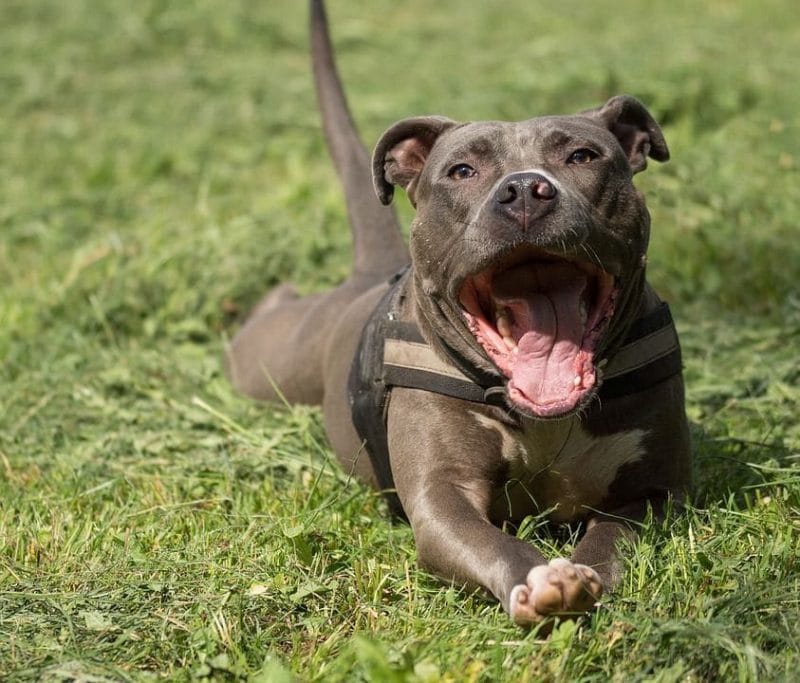 Training and Exercise For The Victorian Bulldog

Victorian Bulldogs have a muscular or an athletic build, but they prefer to lounge around your home all day. This behavior doesn’t mean that the Victorian dog is lazy even if it looks like they don’t like exercise, but they still need one. Because of the canine’s lengthened muzzles and longer legs they have more stamina than their English Bulldog kin.

Take your Victorian canine out for a walk for about 45 minutes on a daily basis. A walk or jogging should be more than enough activity, but if you want your pet can have a wonderful playtime. Some of these dogs like to jump on skateboards and ride on it in public. Playtime is also the best way to keep a Victorian breed mentally sound since boredom can cause destructive tendencies. Do you remember earlier that obesity can affect a Victorian dog? Regular exercises and activities should prevent obesity.

A Victorian Bulldog puppy or adult needs training along with socialization to improve its personality and make it obedient to you. Since this breed loves to interact with you and is an intelligent animal, it should respond positively well to obedience training simple or otherwise. This breed can be a stubborn animal, but it will react well to a firm and consistent yet gentle trainer along with some positive reinforcement methods. Never use physical punishment as well as harmful verbal scolding if your pet fails in an exercise or training activity since they can detrimental to the overall effort. Instead, console your pet and give positive encouragement for it to do better next time.

Socializing your dog involves exposing it to other people and animals by bringing it along with you to public places like the park or market. You can even introduce your pet to visitors in your home. Lastly, be aware that training a Victorian Bulldog puppy is easier unlike an adult so you may need to be more patient with the latter.

Keeping your Victorian Bulldog pet clean and adequately nourished isn’t a hard task for you to do.
For grooming, here are some tips:

As for feeding your dog, meat along with bones and other animal parts should suffice. However, do not make the canine’s meal meat-exclusive since excessive proteins give them hot spots. Mix your pet’s meat diet with semi-cooked veggies, yogurt, raw eggs, fruits, etc. to balance its food intake.

Living with the Victorian Bulldogs

Having a Victorian Bulldog (or another dog for that matter) can change your life and your home. You have to accept the fact that you will be spending money on your pet’s health, food, toys, etc. You also have to invest some time and attention to the dog since a Victorian is hungry (figuratively speaking) for attention and someone to play with it.

Another important thing in living alongside the breed is your home. An apartment or a house with either a big or small yard with fences is a fitting home for a Victorian dog. Just remember to take him out for an exercise on a daily basis or find something to stimulate his mind.

Where Can I Find a Victorian Bulldog?

Adopting a Victorian Bulldog is one way of getting one and there several places that have a Victorian canine waiting for you to give it a good home. You can try your luck with these online sites to help you adopt a dog:

These sites have all the info about the canines that are up for adoption. Most dogs for adoption are adults, and you will rarely get a puppy.

Several dog clubs have granted recognition to the Victorian Bulldog:

Hopefully, other doggie clubs will also give recognition to the dog

The doggie clubs above has a list of legitimate and excellent breeders on their registry. You can also visit these following places for puppies to buy:

These places are online sites, but you can choose to attend them yourself in person.

How to Look For Responsible Victorian Bulldogs Breeders?

The Victorian Bulldog’s price is high but be rest assured that the price is worth the pup since responsible breeders take pains to care for the Victorian dog. Also, don’t confuse breeders of English Bulldogs Bull Terriers with those breeding Victorian dogs since the two breeds are different.

Are Victorian Bulldogs Aggressive or Safe?

For less knowledgeable people, Victorian Bulldogs seem to look fierce and aggressive. Reports of the breed attacking people do not help the perception of the dog. So what is the truth about the canine? Is the breed a safe pet or a dangerous one?

A Victorian’s personality is shaped by two factors: its lineage and how it was raised, trained and socialized. In the first factor, a pure-bred Victorian dog has its aggressive nature that has been bred out. The second factor is important as well since an adequately raised dog is friendly and not hostile to humans.

Both factors underline the importance of getting a Victorian from legitimate and responsible breeders as well as humanely treating the dog. Reports of dogs attacking people are accurate, but the chances are high that these canines are not pure-bred Victorians, have been mistreated as well as abused or both.

The Victorian Bulldog and the English Bulldog are different from one another even if the latter is the former’s antecedent. Here is a list of different traits between the two breeds for comparison:

Some people say that the Victorian Bulldog breed is a different approach in continuing the existence of the Bulldog breed and they seem to be considering the current state of the English Bulldog breed. Many dog lovers of the English Bulldog fear for their future since the breed has been bred carelessly and is afflicted with many health issues. The Victorian dog, on the other hand, is healthier, happier and lives longer. Thus this breed will preserve in parents’ legacy, and we all owe Ken Mollet for doing it.

With the Victorian Bulldog, you have the benefits that come with an English Bulldog without the specters of health issues plaguing you. If you think that this is the pet that will fit right in your home and family, then don’t hesitate. Get one by buying and adopting then you will have the pet that you can love.